API Categories allow restricting an API credential by the kind of operation. 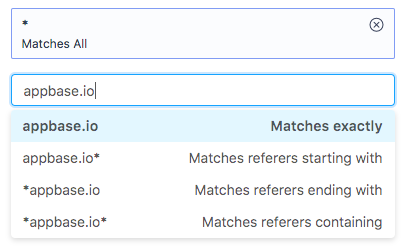 We recommend using HTTP Referers as an additional safeguard to your security model, but not as the only safeguard.

Fields filtering allows setting restrictions on fields that are returned when performing a search action.

Rate Limit by IP allows setting a per hour rate-limit for every unique IP that is used for making an API call with this API credential. By default, no rate limits are set. Setting a rate-limit prevents abuse of data for scraping or denial of service purposes.

Time to Live (TTL) allows setting an optional expiration time till this API credential should be effective. You can create ephemeral keys that are only effective for minutes, hours, days or weeks to limit the surface area of keys being compromised. By default, an API credential lives forever.

How are the credentials authenticated?

An appbase.io credential consists of a username:password format and are authenticated using the HTTP Basic Authentication method.

When making the API request, the credentials are passed using the Authorization header with a base64 encoded value of the actual credentials. Here's an example API credential translated to the Basic Authentication header format.

This is the expected header to be passed when this credential is used directly as a part of the REST API: Authorization: Basic OVpQVkNKTWxzOmJjMWI5M2ZjLTA1OTktNDJmYy1iYzI3LTUwMzRhNzJkYjEzOA==.

If you are using the appbase-js or ReactiveSearch or Searchbox libraries, you don't have to worry about the base64 conversion, these libraries do that for you. If you are using a server-side language, then you will have to add the Authorization header with the correct base64 encoded value of the API key as shown above. You can read more about it in the REST API Reference.